XFL Cheerleaders & How They Contributed To It’s Demise

When The XFL began its inaugural season, the media and the fans had several questions about the league which included what can we expect from this league that would make it different from The NFL, who will be the players playing in this league and are they any good and just how much of the cheerleaders are we going to see and how will they be utilized as it was rumored that The XFL at the time was promoting the cheerleaders in a different manner.

From the beginning, The XFL has been controversial, unique and unconventional. There was an incident wherein The Arena Football League‘s Orlando Predators offended The City Of Orlando with a sexually suggestive billboard and it took them a decade to do that, while The XFL had a similar incident wherein they also offended The City Of Orlando, but it only took them a couple of months to do that.

When The XFL was first established, the league was built around the idea of sex and violence and the major factor that contributed to that idea was their cheerleaders. While league officials sat in their offices in Stamford, Connecticut quietly finalizing XFL rules and assembling teams and personnel, they asked teams to build Web sites. As the league created its own site, with little football news to report, it added a streaming video of something else, which was cheerleaders taking a shower.

Not only were their cameras in the locker rooms of the cheerleaders that were broadcasting them taking a shower, but the cheerleaders were also said to be very flirty and they reportedly got to be up close and personal with players and even gave players and patrons lap dances. But how much of this report is for real? Not a lot, says Heather Brewer, coordinator of the Orlando Rage’s cheerleaders. 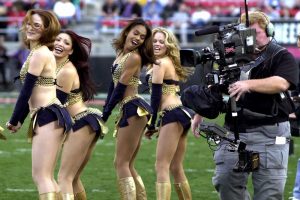 “It’s over the top and controversial,” Brewer said. “I think they created that image for a reason. It makes people wonder what the cheerleaders are going to be like.

Brewer and the Rage women want people to know that this is a legitimate cheerleading group. “I’m sure people think the girls are a bunch of strippers that will date the players, but that’s not us at all,” Brewer says. “We’ve got seven or eight of our girls that have been with other pro cheerleading teams.”

Whatever the cheerleaders were doing at this point was said to not be what the XFL was marketing and selling and the question that was asked by the media and the fans, including UCF cheerleading coach Linda Gooch was whether the marketing and sales pitch was responsible for this happening and whether the message was really understood and really came across as it should have.

“I haven’t seen them [cheer] yet; that should be said first,” Gooch said. “But I don’t like what I’m seeing now and what I’m hearing so far. Aside from them being called `cheerleaders,’ I don’t see any correlation between what they do and what we do.

“I would like to think that there isn’t much similarity. It’s always unfortunate when people take that angle with cheerleading. We work so hard in women’s athletics to have our sports portrayed in a positive light. . . . I don’t like the things I’m hearing about what’s being encouraged. It’s not anything, at this point, I would encourage any of my team members to go into.”

Joe Livecchi, NBC Co-Director for XFL broadcasts, said that the league and the network “knew that we were pushing the line a little bit, which is what the XFL was all about anyway.”

Brewer didn’t mind smudging that line. After all, it was the depiction of college and NFL cheerleaders that formed the line in the first place.

“This criticism of objectifying girls?” Brewer asks rhetorically. “Well, look at the college and NFL games. It objectifies the girls to cut to them for a split second while they shake something. We’re actually giving the girls a voice.” The XFL cheerleaders were said to perform more than just sideline routines and halftime dances. During each game, NBC will put microphones on two cheerleaders and there will be times when the cheerleaders would go into the crowd and interview the fans. During those spots, it won’t be uncommon for the women to exchange commentary with the broadcasters.

“No cheerleader has ever had an experience as significant as this,” Brewer said. “It was almost as if we were casting for a television show. These girls could be huge stars. There is an enormous amount of opportunity in this.

“In the NFL and in college, you get glimpses of these girls as the camera whizzes by. It was amazing to me during the practice game — they had NBC come here and set up, and we did a complete run-through of what it’s really going to be like — they would say, `Go to the cheerleaders,’ and then they’d stay on them for, like, two minutes.”

The cheerleaders were said to certainly benefit from this as they became celebrities and huge stars, but others were wondering whether Vince McMahon’s practices didn’t come out as pure and outright exploitation. It was reported at the time that Vince McMahon even called the cheerleaders “hot babes.” On the XFL Web site, there were even commercials that were depicting the women in short shorts or no clothing or attire at all and these commercials were said to be praised for showing all the women’s “attributes.”

Then there was even this huge controversy about the XFL allowing cheerleaders to date players. In an interview with ESPN The Magazine, Vince McMahon even said that if a player and cheerleader were dating and the player made a mistake in the game, he would have no problem with the cheerleader being asked on the sideline whether she and the player “did the nasty” the night before. But in a December interview with USA Today, Vince McMahon said that the comment was “made in jest.”

The XFL figured that they could take advantage of the media and the public attention as well as the controversy that the cheerleaders were bringing in and that if they pushed the envelope on its cheerleaders, they could draw in more viewers and boost the ratings, because that was what The XFL was all about at the time as they were promoting sex and violence and because of something called “Man stuff.”

But here’s the thing: The cheerleaders that they used at the time weren’t even that risqué. They were a little risqué, but not risqué enough that anyone outside of the “dirty old man” demographic would tune in just for the cheerleaders. This was said to probably even make the cut into pretty much any PG Movie and not any Rated R Movie or Rated X Movie, which isn’t a good thing if sexy cheerleaders were one of The XFL’s major selling points.

In addition to the players and the coaches, The New York/New Jersey Hitmen even provided a cheerleader to comment on everything that goes behind the scenes in the cheerleaders’ locker rooms. Since The XFL was promoting and selling sex and violence as a major element and part of their league, which of course was mainly brought about by the cheerleaders, it only made sense that we get a cheerleader to talk and discuss the feeling and everything that is really going on in their locker rooms.

Cheerleaders Have A Voice Too

It was the XFL who wanted the coaches, the players and especially the cheerleaders to voice their feelings and their opinions as they were marketed as much as the players were. So alongside Coach Rusty Tillman & GM Drew Pearson of The New York/ New Jersey Hitmen was a cheerleader named Karla. The team wouldn’t let her give her last name, but according to one team official, she was “one of the hottest girls on the squad.” Aside from the height and the weight of the cheerleaders, their tattoos and their piercings were very much advertised. The XFL at times was said to look more and more like a strip club.

There was another cheerleader that goes by the name Tanisha and everything that the public thought was happening and the cheerleaders were doing was shot down by her. Below is what she said:

“I feel your pain and I understand your disappointment. You thought the XFL would be the SexFL.” “I feel bad for the people who believed the rumors that there was going to be lap dancing in the stands.” “We didn’t deliver that. And we’re not going to.”

Since the ratings of the league were on a downward spiral, Vince McMahon, in an attempt to salvage The XFL, hyped a peek inside the cheerleaders’ locker room during halftime. It turned out to be a prank and cameras never made it inside, but The XFL nipped at the sleazy underbelly of sports and played on stereotypes and with sex and violence, tried to sell low-rate football that was even worse than Thursday night NFL games.

All of the work and hardships that The XFL put into promoting the stuff that they did especially when it came to their cheerleaders was a detriment to them in the long run as it was one of the factors that led to their demise only after their first season. But despite their eventual collapse, The XFL was able to contribute a great deal to the NFL and to the great sport of American Football.

For years, the XFL was an example of what the football world never wanted their sport to become. But whether we like it or not, some of the most dastardly elements of McMahon’s XFL has made American Football what it is today. The cheerleaders of The XFL made so much impact that even after the inaugural season of The XFL ended, The Lingerie Bowl debuted. This was a league that featured women in underwear playing 7-on-7 football and at the time this became a huge attraction.

Whatever the cheerleaders of The XFL did at the time really worked for them at the start of the inaugural season, but it eventually led to their demise as whatever the cheerleaders may have said and denied, The XFL was still promoting sex and violence. Vince McMahon said that the new XFL will be totally different from the original XFL and that it will not promote sex and violence and it will not have flirty cheerleaders. Could this be one factor that will eventually lead to the rise and success of The XFL? There is only one way to find out and that is to tune it and watch the games once The XFL makes a comeback in early 2020. Also follow the XFL news here.

Report: XFL Returning To The University of Houston And TDECU Stadium

XFL 2023: Coaches/GMs Rumored To Join The League Next

XFL Showcase Attendee List, Who Is Attending The Six Events